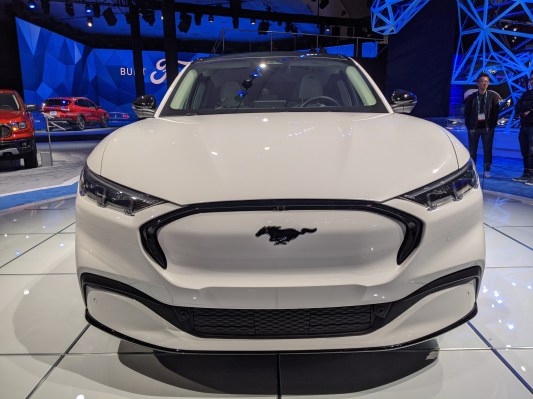 Ford has slashed the price of its upcoming all-electric Mustang Mach-E crossover by as much as $3,000 as the automaker seeks to stay competitive in an increasingly crowded and unsettled sector of the automotive market.

The price reductions, which were shared with dealerships and then posted Tuesday on the MachE Club owners forum, will be provided to everyone, including customers who already reserved a vehicle. TechCrunch confirmed the document with Ford.

Customers with existing reservations have until mid-October to make changes to their orders in light of the price change. The first Mustang Mach-E vehicles are expected to be delivered by the end of the year.

“Exceptional value has always been a hallmark of the Mustang brand. In addition to its great all-electric driving range and performance, we’re adjusting Mustang Mach-E pricing to remain fully competitive in a segment that is seeing dynamic price changes,” Ford said on the pricing sheet, the same language sent to TechCrunch by a spokesperson.

Automaker tweaking prices on vehicles is commonplace. But in the wild and wooly world of EVs, a marketplace that Tesla has long dominated, pricing can fluctuate often and quickly. Price changes are straightforward for EV companies like Tesla that use a direct sales model. It’s more complicated for legacy automakers such as Ford or GM that use the dealership model.

Ford cut prices on the base models of all Mach-E vehicles — effective Tuesday— except for the GT. The cost of Ford’s Mach-E premium models were reduced by $3,000. Ford cut the price of the CA Route 1 models by $2,000 and the “select” and “first” edition models by $1,000.

Ford unveiled the electric crossover last November. The vehicle marks a series of firsts for Ford and the Mustang badge. It’s the first vehicle to come out of Team Edison, the automaker’s dedicated electric vehicle organization. It’s not only the first electric Mustang, it’s also an SUV.